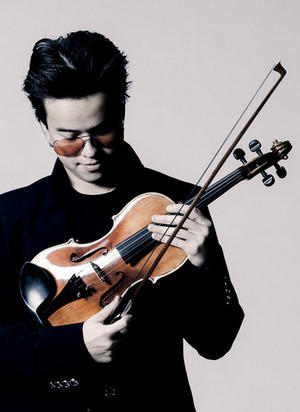 Roman Kim began violin lessons at the age of five. From the age of 7 he studied at the Moscow Central Music School with Galina Turchaninova, took master classes with Midori Goto, Maxim Vengerov and Gidon Kremer among others, and was supported by the Rostropovich Foundation. At the age of 16 he began studies at the Cologne Musikhochschule with Viktor Tretyakov before winning first prize in the 2012 International Competition "Valsesia Musica".

Kim created his own transcription for solo violin of the Bach Air on a G String – the first violinist in history to dare such feat. His stunning and nuanced performance of the work became an overnight sensation on YouTube, and was noticed by the respected German music publisher Bä renreiter, which published the work just this year. His debut with the Cologne Philharmonie (Paganini Concerto no. 1) in 2013 was called “witchcraft, which made the visitors of the Cologne Philharmonie jump from their chairs. ...No one else could create more varied sounds and extravagances in five minutes.”
At the age of 23, Kim is one of the most promising musicians alive and at the beginning of a great career. With his personality and artistic ideas not only is he a brilliant soloist. In the footsteps of Paganini he is expanding the technical possibilities of his instrument. And as a composer, he is enriching the violin repertoire and becoming recognized among experts. Kim plays an Alexander Hazin „Superior” violin (2015, Cologne). Kim resides in Cologne.