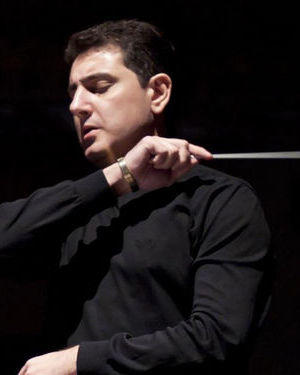 The outstanding Armenian conductor Eduard Topchjan studied violin at the Yerevan Conservatory and went on to study conducting with a prominent Armenian conductor Ohan Durian, followed by valuable consultations from Sir George Solti, Claudio Abbado and Nello Santi. In 1991 he created the Serenade Chamber Orchestra, which appeared with more than 700 concerts in Europe. Eduard Topchjan made his debut with the ANPO in 2000. The same year he was appointed Artistic Director and Principal Conductor of the ANPO and starts successful appearances with the ANPO in Yerevan and abroad, earning much praise for his interpretations of the main symphonic repertoire as well as new compositions. Already in 2001 he appeared with the Armenian National Philharmonic Orchestra at the Grand Hall of the Moscow Conservatory, and in 2003 at the “Bolshoi Theater”. This was followed by the ANPO tours in the Czech Republic, Germany, Slovakia, and France with remarkable concerts in Nuremberg, Prague, Brno, Bratislava, Paris, Lyon, Marseille, Nice and many other cities. In 2008 the ANPO led by Eduard Topchjan made a very successful tour over Japan with 15 concerts. Topchjan is especially known for introducing music both to orchestral and operatic repertoire. He has performed the operas “Aida”, “The Barber of Seville”, “Madame Butterfly”, “Turandot”, “Simone Boccanegra”, “Otello”, “Rigoletto”, “I Pagliacci”, “Eugene Onegin”, “Tosca”, “La Boheme”, “Cavalleria Rusticana” and others.

Eduard Topchjan appears with such celebrated artists as Placido Domingo, Pinchas Zukerman, Renato Bruson, Giuseppe Giacomini, Hasmik Papian, Mischa Maisky, Natalia Gutman, Steven Isserlis, Mario Brunello,  Yuri Bashmet, Emmanuel Pahud, Radovan Vlatkovic, Sergei Nakariakov, Boris Berezovsky, Sergey Khachatryan, Julia Fischer, Isabelle Faust, Sergey Babayan, Konstantin Lifschitz, Francois Joel Thiollier, Narek Hakhnazaryan, Alexei Lyubimov, Bernd Glemser, Kirill Gernstein, Alexander Chaushian, Alexander Malofeev and many others. As a guest conductor he has appeared with 46 important orchestras in Europe, the USA and Asia. Since 2007 Topchjan, together with cellist Alexander Chaushian are the artistic directors of the annual Yerevan International Music Festival. His vast repertoire includes all periods from baroque to contemporary music, symphonic works as well as chamber orchestra repertoire and operas. Many pieces by composers from Armenia and abroad have been written for him and the ANPO, and had a world premiere performed by him and his orchestra.

In 2015 the orchestra under the conductorship of Eduard Topchjan was given the status of “National Orchestra”. In 2007 Maestro Topchjan was granted the title of Meritorious Worker of Arts of Armenia.

In 2011 he was awarded a Gold Medal of the Ministry of Culture of Armenia. Later, in 2013 Maestro Topchjan was befitted with knighthood, being awarded the Italian Order of Merit for Labor (OML) by Giorgio Napolitano. In August, 2014 the Armenian National Philharmonic under the baton of Eduard Topchjan toured to Italy, Austria and Germany, and in 2015 to Scandinavia, the USA, Mexico, Lebanon, Nagorno-Karabakh, Germany, Poland. The year 2016 was noted by the ANPO’s tour to Saint Petersburg, where it appeared with a concert in the frames of famous “Stars of the White Nights” Festival. In 2017/18 season,  Maestro Topchjan and the Armenian National Philharmonic Orchestra will tour to Spain, Germany, the USA, China, Brazil and Argentina.