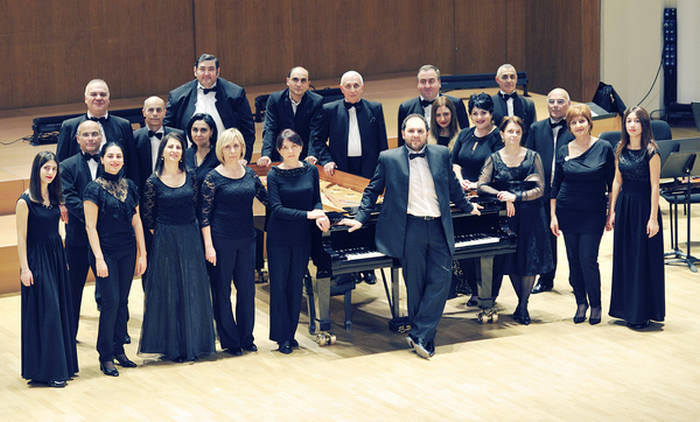 Concert season 2012-2013 has been marked by celebrations of the 50th anniversary of the National Chamber Orchestra of Armenia. Founded in 1962, the status of State Collective was conferred on the Orchestra only in 1966.

The first director of the Orchestra and an Honoured Art Worker, Zareh Sahakiants played an inestimable part in foundation, establishment and fleet advancement of the Orchestra. His character and name are inseparably linked to the formation of the distinctive and exquisite artistic style of the orchestra, definite repertoire stance, enthusiastic welcome of the audience in Armenia and likewise in other USSR republics and in foreign concert halls. The established traditions were further developed and enriched by the subsequent directors or the orchestra - Kostandin Baghdasaryan (since 1975), Ruben Aharonyan (since 1982) and Aram Gharabekian (since 1997). The unique character of the orchestra has been greatly featured by the dedication of these brilliant figures of acute artistic temper.

Today the path covered by the orchestra presents itself as a substantial investment of a talented team in spreading and establishment of chamber music culture in Armenia. Guest conductors as well as most outstanding soloists from Armenia and abroad have performed with this orchestra.

Along with the diversity of the works by European and Russian composers, Armenian music has always occupied a significant place in the repertoire of the orchestra. Premieres of numerous works by Armenian composers have been made aside from valuable arrangements for chamber orchestra. NCOA Collection recordings and CD releases were made prolifically over years as well.

In 2011 Vahan Mardirossian has been appointed the Artistic Director & Principal Conductor of NCOA.

In 2013, on the occasion of Aram Khachaturian's 110th anniversary celebration, the National Chamber Orchestra has participated in the several international festivals held in France, Switzerland and the USA. In 2014 again receiving invitation the orchestra has performed with remarkable acclaim to capacity audience in the France and Switzerland / Festival Puplinge-ի 5 th Anniversary Concert, Victoria Hall, Geneva/. In 2015 on the occasion of Armenian Genocide Centurial and in 2016 has many concerts at «Cordes et Pics», «Puplinge Classique», «Festivaldes Nuits Pianistiques» international festivals.

As conductor, Vahan Mardirossian recorded the violin concerto by Tchaikovsky (Stéphanie-Marie Degand, Caen Orchestra) and the Symphony n°1 for strings by Florentine Mulsant (NCOA). Scheduled for release in 2012 – 2013.

Renowned pianist, Mardirossian often combines both his passions by playing the piano solo in concertos while simultaneously conducting the orchestra from the keyboard (Bach, Haydn, Mozart, Beethoven, Grieg, Shostakovich…). He also plays under the direction of chefs such as Kurt Mazur, Paavo Jarvi, Yutaka Sado, John Axelrod, Yuri Ahronovith.