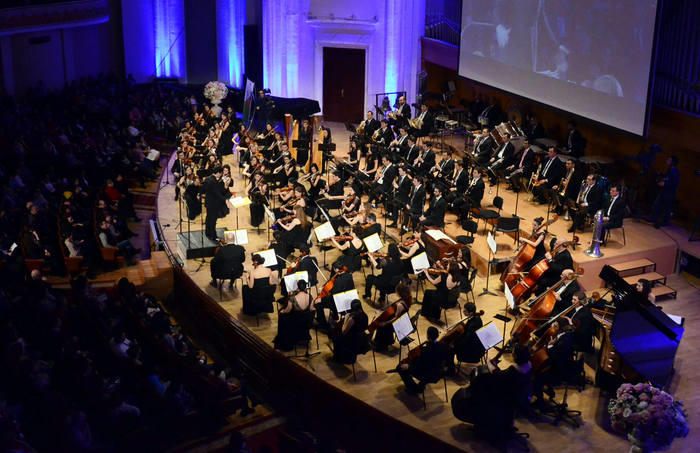 The State Youth Orchestra of Armenia was founded in 2005 by conductor Sergey Smbatyan, who is also its Artistic Director and Principal Conductor. Young and talented musicians’ maturity to follow the right path of life, diligence and devotion to the art have smoothed their way for great stages and rapidly increased the amount of their international awards. In 2008 on the special decision of the Government of the Republic of Armenia the Orchestra was granted the title of “State Orchestra” for their high professionalism and expansion of contemporary music.

The Orchestra has performed with numerous concerts both in Armenia and beyond its borders. It has performed in the most famous concert halls in Germany, France, Russia, Belgium, China, Netherlands, Italy, Lebanon and other countries, such as Opera Garnier (Paris), Konzerthaus (Berlin), Dr. Anton Philipszaal (Hague), Palais des Beaux-Arts (Brussels), P.Tchaikovsky Philharmonic Concert Hall and Conservatory Great Concert Hall (Moscow), etc.

With close-creative relations with the masters of the world stage Valery Gergiev, Krzysztof Penderecki, Vladimir Spivakov, Maxim Vengerov, Denis Matsuev, Vadim Repin, Vag Papyan, Boris Berezovsky and many others. The Orchestra has reached new heights in the music industry.

Young musicians are persistent initiators of new musical projects and series of charitable activities both in Armenia and overseas. Thus, since 2010 under the high patronage of the RA President Serzh Sargsyan the State Youth Orchestra of Armenia has been holding the annual Armenian Composers’ Art Festival, and since 2013 with the support of the RA Ministry of Culture the Orchestra has been realizing the annual Khachaturian International Festival. The State Youth Orchestra of Armenia constantly presents new interesting projects, such as concert series entitled “Hollywood Non-Stop”, “Cartoon Non-Stop”, “Tours to...”, “SYOA Meets” and others. Another peculiar project is the regular series “Master Creates Masters”. Within the framework of the above mentioned project the world famous masters such as Valery Gergiev, Zakhar Bron and many others have already presented master-classes for young generation.

The wide repertoire of the Orchestra ranges from classical to contemporary genre. In 2011 the State Youth Orchestra of Armenia, headed by the artistic director and principal conductor Sergey Smbatyan, released its first CD entitled "Music is the answer". Recorded at Sony recording studio the CD includes works by Pyotr Tchaikovsky, Dmitri Shostakovich and Eduard Hayrapetyan.